Reports are out claiming that Lille striker Divock Origi is willing to move to Liverpool in January. 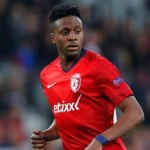 The 19 year old Belgium international is on-loan at Lille for the season.

Origi said: “It is not me who makes the decisions but if the club choose to let me go in January I would go, I would like to join Liverpool then.

“I said that I would stay for the whole season and I wish to remain honourable in that, of course, but if there was a decision by the clubs, I would not say that I would not like to go to Liverpool in January.

“I would love to move to Liverpool sooner rather than later.

“I am here at Lille, its fine, they are a good club and they have helped me.

“I can’t wait to be playing in the Premier League because I can now see that it will suit me better. I think there are good thing waiting for me with Liverpool.”