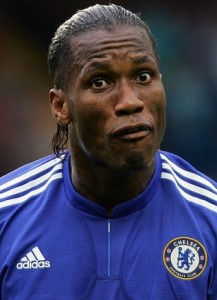 Didier Drogba will be returning to action on Saturday as Chelsea look to extend their winning start to their Premier League campaign to seven matches with victory at Wigan.

Even without Drogba, it would be a major surprise if Carlo Ancelotti’s side failed to overpower Roberto Martinez’s struggling Wigan side and move closer to emulating Chelsea’s last title-winning side, which began the 2005-06 season with nine straight league wins under Jose Mourinho.

Drogba was carried off during last weekend’s win over Tottenham but Ancelotti was relieved to discover the Ivory Coast striker was only suffering from cramp rather than the more serious calf problem feared at the time.

Chelsea will travel north today with a three-point lead over champions Manchester United and a six-point cushion over a chasing pack made up of Liverpool, Manchester City, Aston Villa and Tottenham.