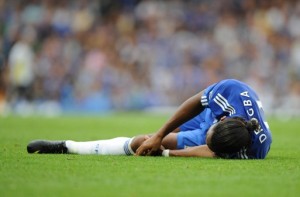 Great news for all Chelsea fans as striker Didier Drogba has been given the all-clear to resume training on Thursday after being carried off against Tottenham on Sunday with a calf injury.

The Ivory Coast international is set to figure in the squad for the trip to Wigan on Saturday after a scan revealed there was no serious damage to his calf.

However, it was revealed that the striker will not be included for Wednesday night’s game against Queens Park Rangers in the Carling Cup.

Assistant boss Ray Wilkins told reporters that Drogba has had a scan and that there is no problem with his calf. Wilkins added that the injury was just the most horrendous bout of cramp.

He also added: that everyone thought Drogba could not release the muscle and that it might be something more nasty but Drogba will be able to take part in Saturday’s Premier League clash.

Wilkins also confirmed academy players Sam Hutchinson, Fabio Borini and Jeffrey Bruma will be in the squad and Joe Cole and Yuri Zhirkov will be in the startling line-up against QPR.