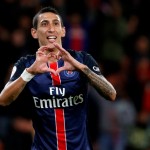 The Argentine international winger joined the Red Devils from Real Madrid for £59.7million in the summer of 2014 before leaving Old Trafford for Paris Saint-Germain for £44m last summer.

Since Di Maria departed United, van Gaal’s side have looked devoid of any creativity and flair while the 27-year-old has used his craft and guile to score seven goals in 15 appearances for the French giants, prompting the following words from Dutch legend van Hanegem.

“It strikes me that he has almost no creative players in his squad,” he told Dutch paper AD.

“Di Maria is such a person, but he was not entirely to his liking in Manchester.

“Some players need to show their football with instincts that you should not take away.