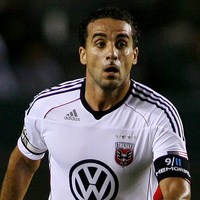 DC United have announced that star playmaker Dwayne De Rosario has signed a new contract with the club.

The 33-year old Canadian midfielder, who joined DC from New York Red Bulls in June, has put pen to a fresh contract but per club and League policy, exact terms of the deal were not disclosed.

DC general manager Dave Kasper was delighted to have secured the services of De Rosario who took out the 2011 MLS MVP award.

“”Dwayne proved last year that is he is the best player in Major League Soccer and we are pleased to have signed him to a deal that will see his stay in DC extended beyond 2012,” said Kasper. ”

“He is the centerpiece of our team – both on the field and in the locker room – and we are thrilled he’ll be wearing our colors for years to come.”

De Rosario added: “It’s nice to be with an organization that has the same goals and ambitions as I. DC United has a very rich history and one that we want to relive in the near future – hopefully we can start this year.

“It’s a great feeling to be associated with the United family. Ever since I came here, the organization and the fans have accepted me as part of the family, and I want to keep this family growing all across the DC area and relive those special moments.”