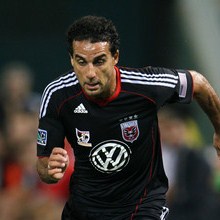 De Rosario was adjudged the winner in a tiebreak as he provided more assists (12) than Wondolowski’s 3.

De Rosario commenced the season with Toronto FC, where he had spent the previous two campaigns, before moving to New York Red Bulls and then onto DC, where he scored 13 of his 16 goals in 18 appearances.

Wondolowski was again the competition’s highest scorer, backing up his 18 goals for the Quakes last term, but was unable to beat De Rosario to the award because of the assists tiebreak rule.