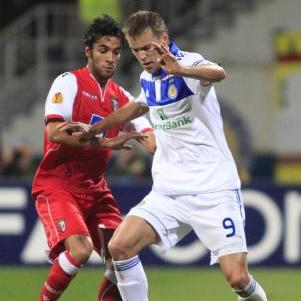 Andriy Shevchenko saw red for Dynamo Kiev as the Ukrainians were held to a frustrating draw in the first leg of their Europa League quarter-final against Braga.

Dynamo looked lively from the first whistle and took the lead after just six minutes when Andriy Yarmolenko fired home.

Braga pulled level just eight minutes later, Ognjen Vukojevic diverting the ball past his goalkeeper to hand the Portuguese side the advantage heading into the second leg.

The hosts’ frustrating night was compounded just after the hour when former Chelsea striker Shevchenko was dismissed after collecting two bookings in just 16 minutes after entering the action as a half-time substitute.