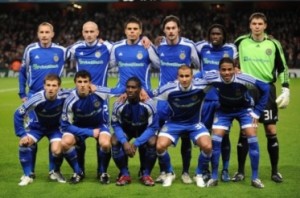 Rubin scored the only goal before the interval through an Alejandro Dominguez free-kick in the 25th minute as Dynamo struggled to impose themselves on the match.

The arrival of Tiberiu Ghioane and Oleh Gusev off the substitutes’ bench lifted Dynamo’s performance and Ayila Yussuf finally opened the scoring for the home team in the 71st minute, heading a Gusev corner into the net.

Shevchenko, Ukraine’s most famous striker and a former European Footballer of the Year, was playing his first game in European competition for Dynamo since his free transfer switch from Chelsea.