Reports have emerged claiming that Dynamo Moscow striker Aleksandr Kokorin is a January target for Arsenal. 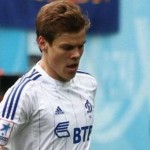 The Daily Mail claims that Gunners manager Arsene Wenger has his eye on a new forward when the transfer market re-opens in January.