Manchester United chief Ed Woodward has declared that the process of building the squad never ends. 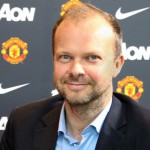 Once the transfer deadline has passed at the end of August, work will already start on assessing potential targets for 2016. The planning is clearly fundamental to ensuring United have a squad capable of competing for top honours.

“It’s really September,” Woodward replied to MUTV, when asked when the whole process starts. “Once the window closes, your scouts are then starting to look at the key areas where you think you may have a weakness and the whole process starts. The manager will have had four more months of working with the squad [by January] and have had much better visibility of who the ins and outs should be, but the work has to have started to get them.

“Yes, essentially there is [a physical list of names] because we track everything. That’s what the scouting team does. It’s relentless because you’re immediately focused on the next [signing]. To that extent, I am completely aligned with the fans. When we tell them we’ve signed a player, there is a moment of happiness but then it’s about who’s next.

“There is a lot of work involved in terms of negotiations and that is time-consuming, so I prefer to look back at it at the end of the window, see the players on the pitch and see how they’ve been blended into the squad.”

Hangeland : Smalling Will Be A Big Success At Manchester United