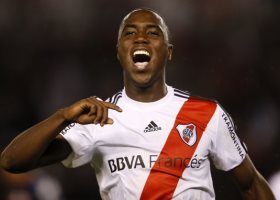 Reports are out claiming that River Plate defender Eder Alvarez Balanta is keen to move to Barcelona.

The 21 year old Colombian international defender has admitted the attraction of joining Barcelona after he was linked with a switch to the Nou Camp.

“I haven’t received any proposal but of course I would very much like to continue my career in such an important team,” he told Sport.

“I wish that they want me. I would have a big dream of playing at Barcelona.”