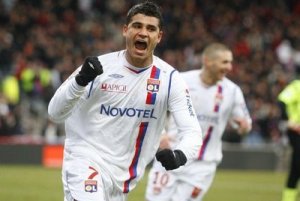 Interesting news are out and it has been reported that Olympique Lyon star Ederson is chasing a move to Italian giants AC Milan.

The Brazilian has been linked with Serie A clubs this year, with Inter chief Marco Branca rating the attacking midfielder highly.

However, Ederson said today that in Brazil, he played with Thiago Silva and that he would join him in Italy. He also said that he is inspired only by Kaka.

Ederson was apart of the Brazil under-17 team that won the 2003 FIFA U-17 World Cup. However, Ederson has yet to be capped by the Seleção.

Under residency rules, Ederson will be able to apply for French citizenship in a few months, thus making him eligible to play for the French national team.

Ederson has stated that he has entertained the idea, but hasn’t really made a decision regarding the switching of allegiances.

Aquilani Dreams Of Scoring For Liverpool