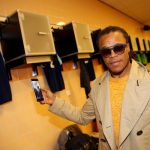 Reports are out claiming that Dutch legend Edgar Davids has rejoiced in the fact that Tottenham can now look over their shoulders at Arsenal.

The North London club’s title hopes were effectively ended following the 1-1 draw with West Bromwich Albion on Monday, but they can still provide a fitting climax to their season by finishing above local rivals Arsenal for the first time since 1995.

Spurs currently lead the Gunners by five points with three games left in the season and Davids feels it is a defining season for the White Hart Lane outfit.

“I feel it’s very important for a club like Tottenham right now to stay on top,” said Davids, who made 40 league appearances for Spurs between 2005 and 2007.

“To win the title would be absolute incredible but to finish second would be also nice. Why? Simply because they can establish something and say let’s go for the top team and no longer be looking forward to Arsenal but now looking backwards.

“I think it’s important for them to finally overcome that brilliant end and create a winning culture that you are seeing with other teams.

“If you are at Man City, if you are with Chelsea, you definitely have to create a winning culture and I think it’s important for Tottenham to stay in the top three for a couple of years to challenge them.”