Edin Dzeko : I’m Not Thinking About Transfer Away 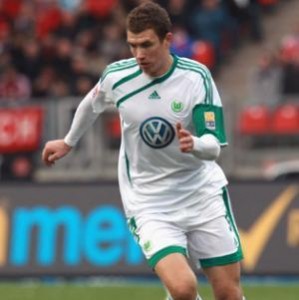 Despite constant speculation about his future, Wolfsburg striker Edin Dzeko has declared that he is not thinking about a move away.

Dzeko, now age 24, has emerged as one of the most sought-after strikers in Europe and has hit seven goals in 11 Bundesliga games this season.

Cash rich Manchester City are rumoured to have made the Bosnia-Herzegovina international their top priority this summer, while Italian giants Juventus are also closely monitoring the situation.

However, the striker claims that he is focused on his current club and has not been carried away by any transfer talk.

“I am not a guy to give people stress,” Dzeko told Eurosport.

“After the club made the decision (not to allow a move) I have been getting back to fully focusing on VfL Wolfsburg and the season ahead. I just wanted to score my goals.

“It is not that difficult to stay, you also need to show you are a strong character. At this point in time I feel no use in thinking about a transfer away from my club.”


Is Andy Carroll Ready For England Call Up? – Vote Now!