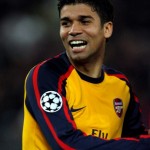 Arsenal striker Eduardo spoke of his relief last night at no longer being branded an ‘official cheat’.

UEFA’s decision to back-track on a two-match ban for diving against Celtic has taken a heavy weight off the Croatian’s back.

Speaking for the first time about the incident in Arsenal’s 3-1 Champions League win, Eduardo, age 26, said that “I am not a cheat. I’m delighted we finally arrived at the truth.”

He also said that “All we needed to do was prove what happened and we have managed to do that.”

Eduardo also said that “I’m not the type of player who needs to be dishonest to score goals.”

He also said that “This decision makes me feel a lot better. I am a calm person who takes things as they come.”

The striker also said that “Now I just want to forget about this and think about our Champions League match against Standard Liege.”

Croatia international striker Eduardo received abuse from the England fans for his Celtic ‘dive’ as his side were thumped 5-1 at Wembley last week.

However Eduardo is now desperate to have a positive impact on Arsenal’s campaign, starting in Belgium tomorrow night.