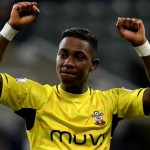 Reports are out claiming that Eljero Elia was delighted with his brace in Southampton’s win at Newcastle United.

The Dutch international’s contribution at St James’ Park proved decisive at the end of a grueling week which saw his side win three times on the road, at Manchester United and Newcastle in the league either side of an FA Cup third round replay victory at Ipswich.

He said: “First we win against Manchester United, then Ipswich Town and now Newcastle United. It’s a very good week.”