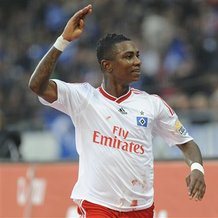 Eljero Elia is reportedly happy to be linked with Italian giants Juventus.

The 24 year old Dutch international has revived his career in Germany in the final months of the season and hi form has attracted the attention of Juve.

“Juve? That would be great.

“For now, however, they are only dreams, I’m still a Hamburg player,” said the Dutchman.

The former FC Twente star has also claimed that Premier League clubs Liverpool and Everton are interested in signing him.