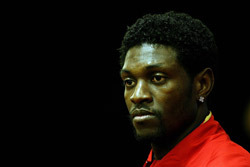 Manchester City will be making ex-Arsenal striker Emmanuel Adebayor the highest paid player in the Premier League after his £25million to the Eastlands last week.

Local newspapers have reported that once his image rights agreement is added, Adebayor, Manchester City’s latest signing from Arsenal, will be paid a staggering £170,000 a week at the City of Manchester Stadium.

These numbers will make him the highest-paid player in the Premier League as well as setting the new benchmark that the division’s other high earners will want to match.

Will this tempt John Terry to make a similar switch to Manchester City?Only time will tell.