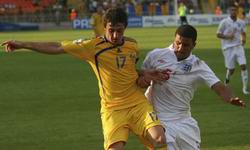 England were beaten 2-0 by a clinical Ukraine in the European U19 Championship final in Donetsk.
The host nation’s goals came five minutes into each half, Denys Garmash volleying superbly from a corner in the first and Dmytro Korkishko dispatching a wonderful free-kick in the second.
England won many corners and spread the play in the first period, but Ukraine were the better team after the break.
A small consolation came via Aston Villa’s Nathan Delfouneso claiming the top goalscorer trophy.
After the opening strike, which Garmash directed with power to give England keeper Jason Steele no chance as he met the ball near the front of the six-yard box, England settled quickly.