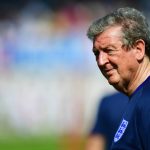 The Daily Mail says Hodgson wants Jamie Vardy to make a quick decision on his future as the Leicester striker agonises over a transfer to Arsenal.

Vardy has verbally agreed a three-year deal worth £120,000 a week, with the option of a further 12 months.

Hodgson does not want any distractions on the eve of Euro 2016 and Vardy will need permission from the England manager to complete a move to the Emirates while on international duty.