Erik Lamela, Tottenham’s record £30 million signing from AS Roma, could be handed his first start for the club against Europa League opposition Tromso. 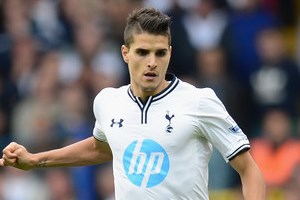 The 21 year old attacking midfielder has only managed two appearances off the bench since his arrival but Spurs boss Villas-Boas has given a strong indication that the Argentine international could start in Thursday’s first Europa League group stage clash with Norwegian side Tromso at White Hart Lane.

Villas-Boas told ESPN : “His qualities are immense, they are not in doubt, but we just didn’t have enough time with him [for Norwich] due to his late arrival in the transfer window and the international game he played,”.

“It was finally good for us to have a few days training with the team and there is a possibility [of starting against Tromso]. He is selected for the game and a player of his quality will threaten to be in the team very soon.

“He has played in different positions up front from a young age. When he left River Plate, first he played behind the striker, then on the left, then as a right winger. The experience he has in three positions means he is creative in all three positions.”