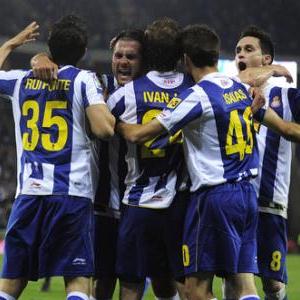 Espanyol re-ignited their hopes of qualification for next season’s Europa League with a 2-1 win at home to Athletic Bilbao at Estadio Cornella-El Prat.

A tepid stalemate burst into life 10 minutes before half-time with three controversial incidents leading to two goals and what should have been a penalty for the hosts.

Pablo Osvaldo broke the deadlock with his 11th goal of the season from what appeared to be a marginally offside position.

Any issues Athletic Club had with the decision were soon forgotten as Markel Susaeta went down rather easily under pressure from Joan Verdu.

The midfielder dispatched the equaliser from that free-kick, curling beautifully inside the right-hand post.

And the visitors rode their luck again in the final minute of the half when no penalty was given despite goalkeeper Gorka Iraizoz clearly bringing down Ivan Alonso.

But Alonso had the last laugh, converting a Osvaldo cross-shot from close range to bring Espanyol within three points of the Basques, who sit seventh, the final Europa League qualification spot.