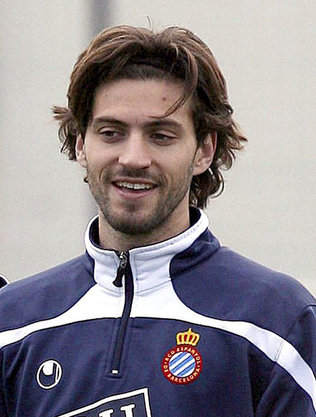 It was a sad day in football as Espanyol captain and defender Dani Jarque died from heart failure while on a pre-season tour of Italy.

The 26-year-old Jarque had trained with his teammates in the morning but collapsed in his hotel room in Coverciano while talking to his girlfriend on the telephone in the early evening.

The club had been due to play friendlies against Bologna and Livorno in the coming days, on their Italian tour.

Jarque came up through the youth ranks at Espanyol, helping them win the King’s Cup in 2006 and to reach the UEFA Cup final in 2007, and had just been made captain of the club for the new season.

Jarque’s death comes nearly two years after that of Sevilla midfielder Antonio Puerta who died on August 28, 2007, three days after collapsing during a Primera Liga match against Getafe.

A minute’s silence was observed at the start of the second half of a pre-season friendly at the Mestella Stadium where Valencia were taking on English side Arsenal as players from both sides wore black armbands.