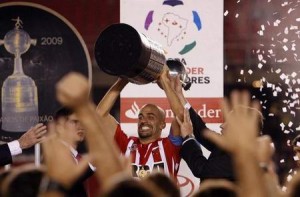 Juan Sebastián Verón led Estudiantes to their fourth Copa Libertadores and their first since 1970 when they upset Brazil’s Cruzeiro 2–1 in the second leg of the final at the Mineirao in Belo Horizonte.

The Argentinian club, who lifted the trophy three times in a row from 1968, triumphed 2–1 on aggregate after a 0–0 draw at home in La Plata last week.

It was a special achievement for Verón, emulating his father Juan Ramón, the outstanding player of the Estudiantes side that won the club’s three previous titles. “Let them enjoy this – it’s for the fans. It’s unique,” said the former Lazio and Manchester United midfielder.

“We have to raise a monument to all the players,” said the coach, Alex Sabella, the Sheffield United and Leeds midfielder of the 1970s and 80s. “Verón is the greatest ever Estudiantes player.”


Real Madrid Know What Cristiano Ronaldo Can Do…- Pictures