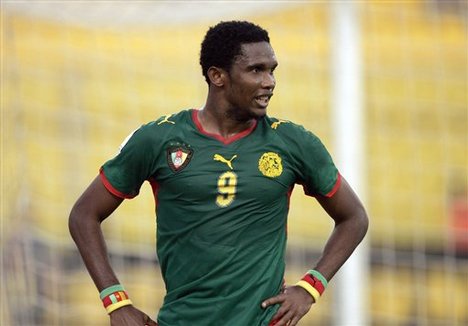 New Inter Milan striker Samuel Eto’o has revealed that it will be an honour to play for manager Jose Mourinho after denying he had criticised the Portuguese coach’s style of football.

The former Barcelona striker, who completed his swap deal with Zlatan Ibrahimovic on Monday, played against Mourinho’s Chelsea side in some notably fractious European matches while in Spain.

Eto’o told reporters that he never said that he didn’t like Mourinho’s style of play and for years he have had the chance to play for Mourinho but it never happened until now.

The Cameroon international said that it is an honour for him to have Mourinho as coach.

The 28-year-old did not agree with those who say Serie A has suffered a drop in class compared to Spain but was aware that the occasional racist abuse he received in La Liga could re-emerge in Italy.

Eto’o also said that the level of Serie A has not got worse as there are many strong players and it is true that he has played his whole career in Spain but he said that he also played lots of international matches.

The striker also said that he will speak up when there are problems and that he is proud of the colour of his skin. He said that racism is a problem of education more than anything else, and he expects politicians to sort it out.

Eto’o, who is likely to play in the Italian Super Cup against Lazio on August 8 in Beijing and may feature sooner, has taken the number nine shirt at the Serie A champions.