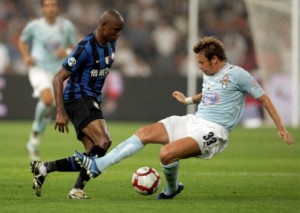 Inter Milan and Cameroon international striker Samuel Eto’o has revealed that he is taking legal action against Barcelona over money he claims he is owed.

A local Spanish radio station has said that Eto’o is seeking a 15 per cent cut from the transfer fee that took him from Barcelona to Inter Milan this summer.

Eto’o’s move to Inter was assessed to be for €20 million, which would entitle him to around €3 million.

It’s reported that Eto’o has attempted several times to make contact with Barcelona to open talks about his claim, but has not received any reply, hence the decision to go to the courts.