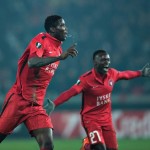 Man United have won just three matches by a two-goal victory in their last 20. Both against lower-league teams.

Midtjylland had more shots than United in the first leg (11 to 10) despite only having 37% possession.

Man United have won three of their four European matches at home this season (D1).

Midtjylland have lost their last two European away games without scoring, conceding six goals in the process.