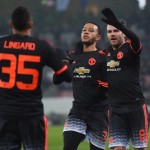 Louis van Gaal intends to start with his strongest possible team on Thursday evening. Marcos Rojo returns to the squad but the Argentine full-back will only play a maximum of 20 minutes.

Antonio Valencia has been training individually ‘as part of his recovery programme’ but won’t be risked.

Adnan Januzaj has recovered from a hamstring problem. However, the winger is cup-tied while David de Gea is not fit. Van Gaal ‘will wait and see on other players’.

Expect little or no change from Midtjylland, who are still in the midst of a winter break.

Their Superliga season won’t resume until next week after more than two months, which makes the first leg victory even more impressive/shocking, depending on your standpoint.

A knee injury has kept Johan Dahlin out since August which means goalkeeping responsibilities have fallen to former Reading stopper Mikkel Andersen.

Paul Onuachu will be hoping his winning goal from the bench a week ago is enough to earn him a place in the starting eleven.