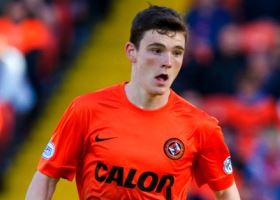 It is said that the Goodison Park gaffer watched the highly-rated full-back in action back in January but a bid failed to materialise.