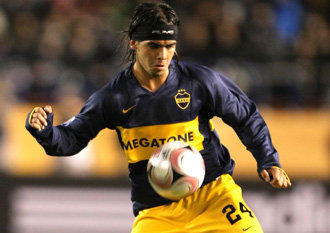 It has been revealed that English Premier League side Everton FC will sign Argentina ace Ever Banega if he can get a work permit.

Toffees manager David Moyes has lined up the midfielder, now age 21, for a season-long loan from Valencia but it is believed that there could be complications with the application because he has not played in 75 per cent of internationals over the past two years.

Banega is highly-rated having been signed by Valencia for around £15million from Boca Juniors 18 months ago and a failure to settle meant he spent last season on loan at Atletico Madrid.

Moyes is also determined to bring in another centre-back, with Middlesbrough’s Robert Huth overtaking Philippe Senderos of Arsenal as the main target.