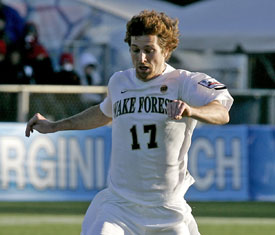 Latest transfer news are out and it has been reported that Carolina Dynamo striker Cody Arnoux is on the verge of completing a move to English Premier League club Everton.

It was reported that the 21-year old is expected to sign a one-year deal with the Toffees where he will join the reserves team for further his development.

Everton boss David Moyes is not likely to use Arnoux, who scored 13 goals in 16 matches with the Dynamo (in the fourth-tier), but eyes him as a prospect for the future.