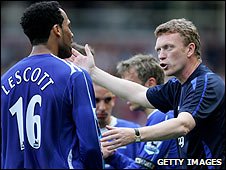 It has been reported that Everton FC will demand an amazing £30million from cash-rich Manchester City for central defender Joleon Lescott.

That figure is double the amount City offered last week for defender Lescott, who will be 27 next month and Everton believes that this figure will not be a problem for Manchester City.

Everton’s chairman Bill Kenwright and manager David Moyes both wants Lescott to stay with Everton with three years left on his contract and has insisted that the player won’t be sold.

Local newspapers have reported that Everton will only be interested in opening talks if they get an offer of £30m (a British record for a defender) or if Lescott himself asks for a transfer.

It is believed that Everton feel if City are prepared to pay £30m for Chelsea centre-half John Terry, 29 in December, they will have to offer that much for Lescott, who was bought for £5m from Wolves three years ago.

However it has been reported that Manchester City are prepared to wait for John Terry, even though manager Mark Hughes wants to pair him at the heart of his defence with Lescott for the start of the new season on August 15.

But new Chelsea boss Carlo Ancelotti said yesterday that he is sure he will remain at Chelsea 100 per cent as he has a contract for three more years.

Arsene Wenger In No Hurry To Replace Adebayor


David Beckham And LA Galaxy To Play Against AC Milan