It has been reported that former Arsenal striker Nicklas Bendtner is finding life tough at VfL Wolfsburg. 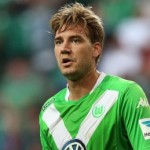 The former Gunners forward joined Wolfsburg at the start of the season, but has failed to nail down a regular start.

“I thought I was on the right track, but I do not know what has happened. I am not happy with the first half-season in which I in many ways was disappointed,” Bendtner told Kicker.

“I hope we find a better way together going forward, and that I get to play more.

“I signed a contract not for half a year, I signed a long contract with Wolfsburg.”