It has been reported that former Manchester United captain Nemanja Vidic is delighted with his move to Inter Milan. 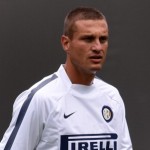 The Serbian international has arrived at San Siro on a three-year contract.

“Inter are one of the biggest clubs in the world, with great history and tradition,” Vidic said. “There is a new project here and I liked it immediately, I am happy to be here.

“I could have come to Italy many years ago, but now I finally have the chance to be here. I don’t think it is a step back in my career.

“Italian football is suited to the way I play and, as I’ve said, I’m at one of the biggest clubs in Europe.

“The idea is to grow on the pitch, that’s the mentality. A big club like Inter always has big expectations, we need to be proud of what we have done at the end of the season.

“Last year I watched a lot of Inter matches and had the chance to get to know my new team. I’ve never played in a three-man defence, but the role of a defender remains the same whether you are in a three or four.”

Vidic also revealed that he spoke to compatriot and Inter legend Dejan Stankovic before deciding to make the move to Serie A.

“I spoke to Dejan but he is not the only Serb who has worn this shirt. I am pleased to continue this tradition at Inter.”