Lukas Podolski bagged a brace as Arsenal progressed to the fifth round of the FA Cup with a routine 4-0 victory over League One play-off hopefuls Coventry City. 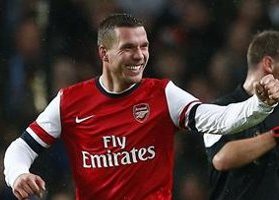 It took the hosts just 15 minutes to break the deadlock when Mezut Ozil played a brilliant pass to Podolski who found the net with a cool finish from an acute angle.

The German international found the net again 12 minutes later to double his side’s advantage. His fellow countryman Per Mertesacker rose highest at the near post to flick on a header and Podolski was in the right place at the right time to nod home.

The visitors came out fighting in the second-half and produced a much better showing to give the Gunners a scare. Coventry’s unsettled striker Leon Clarke found himself one-on-one with Lukasz Fabianski but the Arsenal goalkeeper made a good stop with his legs. Clarke also struck a post as the Sky Blues pushed for a goal.

But Giroud killed off all hopes on 84 minutes when he slid the ball past Joe Murphy after he latched onto Kieran Gibb’s cut back pass.

And Cazorla added extra gloss as he scored Arsenal’s fourth of the night with a spectacularly volley after Murphy had parried the impressive Carl Jenkinson’s shot.