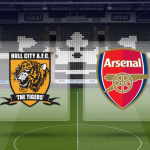 Hull City and Arsenal are expected to make significant changes to their starting line-ups for their FA Cup last-16 replay on Tuesday.

The Gunners travel to the Championship side following a 0-0 draw in the original tie at Emirates Stadium.

Hull have a fully-fit squad to choose from, with Shaun Maloney and Nick Powell likely to make rare starts.

Petr Cech and Laurent Koscielny (both calf) are still missing for Arsenal, while Francis Coquelin is suspended.

They join Jack Wilshere (leg), Tomas Rosicky (thigh), Santi Cazorla (knee) and Alex Oxlade-Chamberlain (knee) in being unavailable for the tie at the KC Stadium.

Arsenal, who are attempting to lift the FA Cup for a third consecutive year, have not won in five matches in all competitions, while Hull are third in the Championship but have only one victory in their past five games.

The winners will be at home to Watford in the quarter-finals on Sunday.