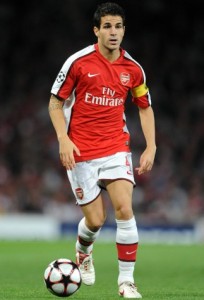 Arsenal midfielder Cesc Fabregas played the game of his life then revealed that he is keen to stay at the club he loves.

The Gunners captain made four goals, scored an amazing goal himself and also struck the bar before going off to a standing ovation.

He said that there is always speculation that he does not like to stay at Arsenal but said that he is committed 100 per cent to the club.

He added that it ‘is his seventh season with Arsenal and that it is hard to hear people say they think that he is not committed enough.

Fabregas said that it was a good time to show the fans that he really love the club.

Fabregas, now age 22, shone in front of former skipper Thierry Henry and when he hit a left-foot half-volley into the top corner of the net, he dedicated the strike to Henry and kissed the club badge.

Fabregas finished by laying on a goal for Theo Walcott, making his first appearance of the season.

Boss Arsene Wenger later said that Fabregas creates chances in every game he plays and added that what is important is for Fabregas to score goals.

Wenger added that Thierry Henry inspired Arsenal’s goalscoring because the players wanted to show Thierry that they could score goals.


Premier League Title Is Ours To Lose, Says Carlo Ancelotti