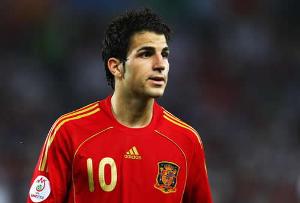 Spain international midfielder Cesc Fabregas has been said to have left the Spain squad in Armenia and fly to Barcelona because of a “serious family matter”.

It is now said that the midfielder will miss Wednesday’s World Cup Group Five qualifier match in Bosnia.

The Arsenal captain, who scored to set Spain on their way to a 2-1 win in Yerevan on Saturday, had flown to the Catalan capital with Barcelona pair Xavi and Carles Puyol who will also miss the match in Zenica.

It is believed that midfielder Xavi has a problem with his right knee and will be treated by Barcelona’s medical staff and defender Puyol was booked against Armenia and is suspended for the Bosnia match.