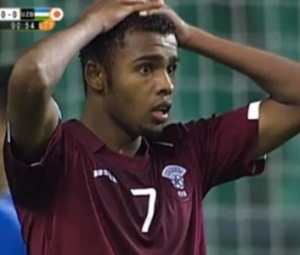 Is this the greatest miss in football history? Qatar’s Fahad Khalfan missed the easiest of open goals in the Asian Games against Uzbekistan.

After a sensational blunder by Uzbeki goalkeeper Timur Juraev, Fahad Khalfan found himself open in the penalty box and raced towards an open goal.

Instead of taking his time to put the ball in the net, Khalfan coolly tried a cheeky outside the boot tap in goal. However to his absolute horror, the ball hits the posts and goes back into play.

To add more misery on Khalfan, Qatar went on to lose the match 1-0.

He will be more careful the next time i guess. Check out the video.