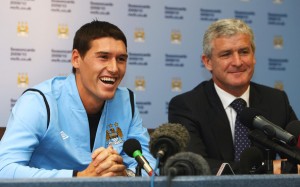 Manchester City manager Mark Hughes has said that midfielder Gareth Barry should be given a hero’s reception on his return to Aston Villa tonight and not a bucketload of abuse.

The Aston Villa fans were clearly furious when Barry deserted them for Manchester City in a £12million transfer this summer.

It came 12 months after he tried to leave for Liverpool, citing his need for Champions League football.

Hughes told reporters that hopes that Barry does not get a bad reception from the Villa fans.

Hughes added that Barry gave Aston Villa an exemplary service and that fans should thank them for what former players did for the club instead of trying to take issue with players.

Hughes also said that Barry has said that he wanted to play in the Champions League but Manchester City had other things to offer him.