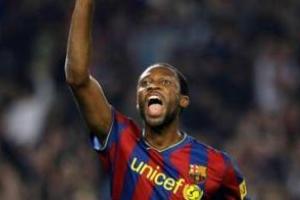 Seydou Keita grabbed a hat-trick as Barcelona returned to the top of La Liga with a comprehensive 6-1 rout of Real Zaragoza.

Barcelona bounced back from a dip in form to dismantle Zaragoza with incisive, attacking play from their star trio – Lionel Messi, Andres Iniesta and Zlatan Ibrahimovic.

Messi was the man who pulled the strings throughout, shrugging off his recent drop in form to set up Keita with the first. The Argentine playmaker receiving Xavi’s short corner, before turning sharply and delivering an inch-perfect cross onto the head of the unmarked Keita who powered home.

On the half-hour mark, it became two; Iniesta drawing Zaragoza’s Gabi into an unnecessary foul. Up stepped Ibrahimovic, who powered the resulting 30 yard free-kick past the hapless Juan Pablo Carrizo. Then, just before half-time, Keita killed off the contest by slotting home Ibrahimovic’s square-ball, having run the length of the field to grab his second of the game.

Any thoughts that Barcelona would take their foot off the pedal coming into the second-half were quickly crushed, as Ibrahimovic tapped in his second from close-range following a neat ball from Keita.

Victor Valdes had little to do in the Barcelona goal throughout the game, so it was surprising to see the away side claw a goal back with just over ten minutes remaining. Jorge Lopez striking low, after Valdes had first denied Ewerthon with a smart save.

Barca quickly made amends as Messi got on the scoresheet after being set up by Iniesta before Keita completed his hat-trick with a powerful header from an out-swinging Iniesta corner.