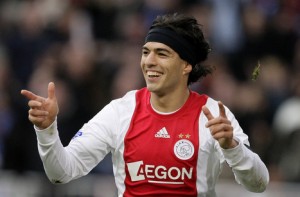 Interesting news are out and it has been reported that Spanish and European champions FC Barcelona are keen on Ajax striker Luis Suarez.

Local Spanish newspapers have reported that Barcelona coach Pep Guardiola is keeping tabs on Suarez’s progress, aware that the Uruguay international has kicked off the season in impressive form.

It is however reported that Suarez is being tracked by Europe’s biggest clubs, but the Barcelona influence at Ajax with Gabri and Oleguer has the striker favouring a move to the Nou Camp.

While maintaining confidence in Bojan Krkic, Guardiola is exploring the prospect of moving for Suarez in January.

Suarez has so far played a total of 71 matches for Ajax and scored an impressive 49 goals along the way.


Bellamy No Longer Under Police Investigation