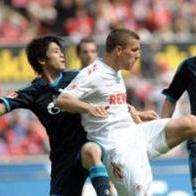 Cologne finished their season on a high note by seeing off Schalke for their third straight victory.

Milivoje Novakovic put Cologne ahead after 25 minutes and Mato Jajalo made it 2-0 in the 60th minute. Schalke struck the woodwork three times before finally cutting the deficit to 2-1 after 87 minutes through Raul.

Cologne’s third consecutive win gave them 44 points to leave them 10th while Schalke, who will take on Duisburg in the German Cup final later this month, finished the season with five games without a victory.