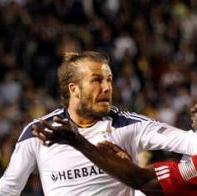 Dallas will now meet the Colorado Rapids in Sunday’s final in Toronto with the MLS championship at stake and both team seeking their first league title.

Beckham looked short of full fitness as the Galaxy were out-thought by an intelligent and better-organised Dallas team.