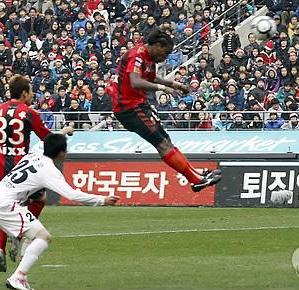 After battling to a 2-2 draw in Jeju in the first leg on Wednesday, Seoul rallied from a goal down on Sunday to claim the title with a 4-3 aggregate victory in front of more than 55,000 fans.

After having a goal disallowed for offside in the 10th minute, Seoul fell behind to Brazilian Santos’s goal 15 minutes later.

However, Seoul striker Jung Jo-gook equalised with a penalty three minutes later before Adilson Dos Santos headed the winner from a corner in the 72nd minute.

The team last won the K-League title in 2000 when they were based in Anyang.