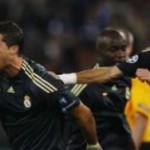 Cristiano Ronaldo scored twice from free kicks as Real Madrid began their Champions League campaign with a 5-2 win at FC Zurich despite a brave fightback from the rank outsiders.

The nine-times European champions appeared to be cruising in their first Champions League outing since their 250-million-euro spending spree when Ronaldo, Raul and Gonzalo Higuain scored in an 18-minute spell before halftime in the Group C game.

The Swiss champions hit back with two goals in a minute during the second half but two late goals restored Real’s three-goal lead.

Portuguese forward Ronaldo, taunted by Zurich fans insulting him in Spanish, opened the scoring with a rasping free kick from the edge of the area, his third goal in as many games since his record £80 million move from Manchester United.