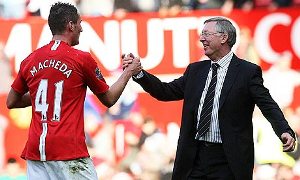 The 17 year old Italian told reporters that it is very important for him to learn from Owen because he is one of the best strikers in the world.

The former Lazio youth trainee also added that if he works with Owen and learn, he will definitely improve his game and get better every day.

At the end of his first season in the Manchester United first team, Macheda was named as the Jimmy Murphy Academy Player of the Year in recognition of his performances in the under-18s, the reserves and the first team.