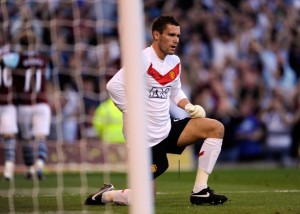 It was also reported that third choice goalkeeper Tomasz Kuszczak will play in goal tonight as United put out a reserve side against Wolves in the Carling Cup.

It was also reported that if Kuszczak has a good game he will stay in for the Premier League match at Stoke after a series of blunders by Foster.

First-choice Edwin Van der Sar, age 38, is recovering from a broken thumb and will not be back for three more weeks.

Foster, 26, had hoped to replace the Dutch veteran permanently but United are worried about him flapping at high balls of which there will be plenty from Stoke.