Fernando Torres Confident Liverpool Can Win The Premiership Next Season 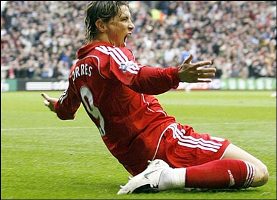 Torres, who made his first appearance of pre-season for Liverpool as a late substitute in Bangkok on Wednesday, insisted that after giving rivals Manchester United a run for their money last season, this could be the year that the title returns to Anfield.

Torres also went on to say that maybe this season will be more important because Liverpool have a fantastic squad and that the team can definitely can play better than last season.

Torres also ended by saying that he came to Liverpool to win trophies but he is very sure that this time Liverpool will win the Premier League or the Champions League or a big trophy like that.


Samuel Eto’o On The Verge Of Joining Inter Milan