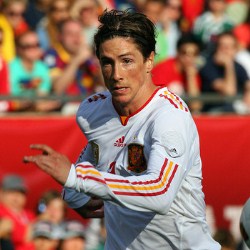 Fernando Torres is happy with his goal in Spain’s 4-0 thrashing of the USA.

The former Liverpool striker is happy to be signing off from a difficult season with a goal for his country.

Torres told TVE after the game : “I felt very comfortable from the beginning. I felt good and I was really committed. It has been a tough year for me,”.

“I have only played twice for the national team in recent times. The injuries I have had prevented me from being in good shape. I am happy that the team won and that everything was perfect.”

The former Atletico Madrid forward hopes that his darkest days are behind him and that he will be back to his best next season once he recharges his batteries over the next few weeks.

“Now I will think of the Venezuela game [on Tuesday] and then afterwards I will go on my holidays,” he said. “I hope that next season will be different.”

No Chelsea offer for Adebayor

Chelsea Include Daniel Sturridge In Bid For Theo Walcott